TO THE SOURCE OF TEN THOUSAND THINGS

Holding the source of Yin and Yang. This translation of the term Tai Chi Chuan, recently proposed by M° Carlo Lopez, is the one I like the most because it reminds us of the vision of the empty fist of the Buddha or the fist opening before Kasyapa showing him a rose. 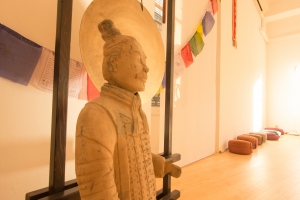 Holding, handling, points to a deep knowledge with naturalness.

It’s from polarities meeting that life is born and shows itself; inner energy is the expression of life itself and keeps healthy and stable our dense and subtle bodies. On this level, Tai Chi Chuan acts to develop the potential of personal energy. This potential develops and takes form only whne parts meet with nodivision. Opnness and relaxation, martiality and well­being, awareness and fuidity, Yin and Yang are the key concepts of life­long Taoist practices we are referring to when speaking of Tai Chi and they are functional only if applied simultaneously and in the absence of distance.

Each part of being needs to be acknowledged and lived from within: if wedeny an aspect, we reject an important part of ourselves.

A founding, little­known couple is the one formed by Yi and Qi. Tai Chi and Qi Gong allow and ease the flowing of the Qi, the energy flowing in our body and allowing us to be healthy. The Qi on its own isn’t enough, it’s guided by the Yi: from intention, from the mind. An exceedingly martial mind is rigid, we become obsessive, inflexibe, we train too much. If the mind isn’t martial enough, we are overcome by life, overwhelmed by events. We may use a simple analogy and see the body as a vehicle. The Yi is the battery (mind), the Qi the fuel (energy). If our car is filled up, but the battery is dead, it won’t start. The battery can work only if it’s charged and in a proper connection with other components, that is, if it has the right structure. 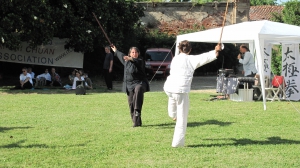 Working on the structure rather than on muscles, each position in Tai Chi Chuan, leads to a free diaphragm movement massaging internal organs, a better irroration and the relaxation needed to keep a correct and powerful posture.

The practice of Tai Chi Chuan teaches us to fow and resonate with the polarity we are immerged in, acknowledging our energy blocks, working with subtlety and strength where we find the obstacle.

By moving in a natural way, in harmony with our structure, without physical stregth, we are totally aware of each and every part: moving slowly allows us to live the time of awareness. The more we practice it, the more we interiorize awareness, leading to an inner cleanness presenting itself in an inner unity, perceived also as fluidity. 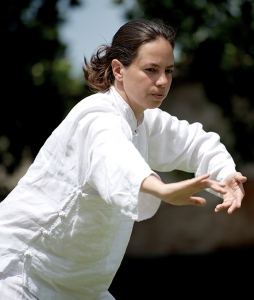 Awareness and fluidity are themselvers part of a Tao.

Nowadays, awareness practices are widespread and much admired; they are sources of self­knowledge and self­understanding, but they can turn empty, an end in themselves, if they are not practiced with spontaniety and naturalness. Awareness without fluidity risks to remain stuck in the middle way, in compromises serving inadequately an individual’s tastes and inclinations. In the Taoist approach themiddle way isnt’ in usinson with the universal harmony where each one of us adds their own note and their own frequency within the choir. This is traditionally called dharma, something that is sometimes erroneously translated as “duty”. We could describe it as “doing the things we are born for”.

Doing what is apt to us as individuals in the environment we live in.

To gain awareness and spontaneity we need to leave behind us acquired habits, reactions, ways of being and acting that too often are conditioned by experiences clacified within us.

A process of de­identification passing through all level of our personality: physical, emotional, mental.

In the practice of Tai Chi Chuang as in meditation, the static and dynamic forms we make are the ways to work deeplu on ouselves in our return to the source, Point Zero where we find the meeting of axes out of which life dimensions grow: a vertical axis linked to the spiritual aspect, a horizontal axis linked to the evolving of events in the times­space, and a depth axis that could push us far from full potentiality.

Without going outside, you may know the whole world.

Without looking through the window, you may see the ways of heaven.

The farther you go, the less you know.

Thus the sage knows without travelling;

He sees without looking;

He works without doing.