Home/THANKS TO HER HE EXISTS, WITHOUT HIM SHE WOULD NOT BE

THANKS TO HER HE EXISTS, WITHOUT HIM SHE WOULD NOT BE 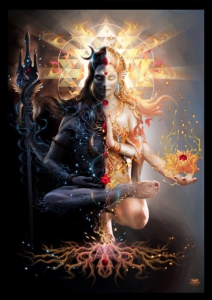 Ardhanarisvar, half male, half female, represents the ancient symbolism of the two complementary parts of the One, the cosmic principle.

Two forces that interact constantly, giving birth to the process of continuous evolution which is revealed to us as life or representation of reality.

One vast field of conscious and intelligent energy, able to manifest itself infinitely through finite forms, from galaxies to human beings … and infinitely more.

Space that creates words from silence, movement from stillness, possibility of intention from vastness.

Absolute Power and Creation, maintenance and dissolution of the Universe that is in perpetual transformation and continuous adjustment, absolute principle of fertility and life.

The Cosmic Womb, Hiranyagarbha, as described in the ancient land of India.

The feminine principle moves, emerges from the &quot;chaos&quot; and creates…

All this belongs to it: Containment, nourishment, care, growth, gestation, acceleration and the “dark” side, so called because not yet manifest, unknown, unlimited.

Such is the movement generated by Shakti, from primeval chaos to become eros, that is life and inspiration.

The immanent aspect of the Divine which becomes material, shape, world, taking its root.

The Great Mother, Gea, the Earth, the Goddess … accompanied by all aspects of the feminine in her quality of intuition, vision, receptivity, sensitivity, deep transformation, acceptance.

The male principle, the container, the one who is responsible for defining and maintaining the shape, preserving and protecting it, ensuring its continuity.

He fixes forms externally, making them known and visible.

The male principle, analytical and rational, uses his &quot;focus&quot;, that is his ability to analyze, focus, synthesis, management, containment.

Shiva is the light, before and beyond any form. He transcends, being pure awareness. Shiva is being, Shakti is becoming. The same Divine Consciousness that is embodied.

Shiva observes and contains the dance of Shakti, from the big-bang to the forms of life, to human societies, cultures, thoughts, ideas, emotions, inspirations …

And Shakti becomes the passionate urgency that inspires us to go beyond limits, beyond the fixed patterns of our mind to expand our consciousness again and again.

The power of Shiva to experiment is Shakti herself! Two principles that, together, harmoniously, with different polarities serve the One.

From stillness to motion, from silence to intention, from intuition to action that becomes form and structure. 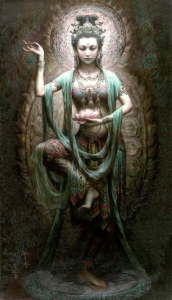 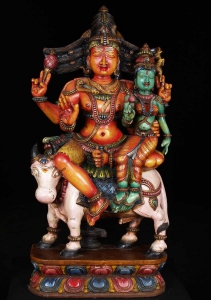 The endless dance of these two principles follows the cosmic laws allowing us to create, in a human dimension, the spirituality that brings us closer to understanding who we are, to touch our  “composition”, the nature of the mind, of emotions, of that vast field of energy that has given us life and form.

It helps us to perceive and feel how the physical body can be a sensitive and perfect tool to receive information that can be translated into life experiences, thus reactivating ancient memories.

Shiva and Shakti complement each other in the principle of Unity and support each otherin the same capacity of action and non-action, harmony and balance by deeply listening to each other.

A perfect marriage practising restraint and flexibility, the finished form and its infinitude, holding and letting go … the masculine and the feminine.

This understanding enables us to fulfill our part in the infinite book of life, without any separation.