ANDEAN SPIRITUALITY, THE THREE POWERS AND THE THREE WORLDS

The first thing that made me fall in love with Andean culture was its simplicity. The same simplicity that you find in the eyes of these people, humble and happy, living often in conditions that would look impossible for us Westerners. The hard work, the height that takes your breath away, a lifestyle of another era seem to have fortified inner peace in the Andean people, who often love to laugh like children with an open smile.

The greatest virtue of their culture is the respect for the Pachamama, as they call Mother Earth in Quechua, whom they thank and bless just as loving and respectful children would do. The most common and popular spiritual practice within this tradition is called “ayawariska”; or even “despacho”; it consists of an offering ritual, built as a kind of mandala, which is then burnt in the fire or buried. In the Andes every “paqo” or shaman- priest gives his offer to Pachamama and to the “Apus” or spirits of the mountains on a daily basis. 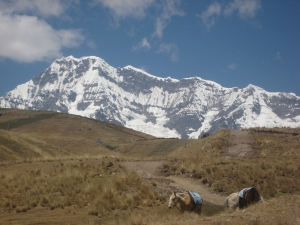 Even Father Sun, &quot;Tayta Inti&quot;, is at the center of the Andean shamanic tradition. This culture was deeply connected with the sun not only as a physical phenomenon, seen as an expression of light and heat, but also as a manifestation of the Cosmic Father. The Andean people called themselves “Inti Churi” that is sons of the sun and the same word Inka means sunlight or son of light. In the Andean culture the man is the son of the sun and has therefore the same attributes and the same power of the sun, that is he a little sun, made of light and energy. The Andean believe to be children of Pachamama and Inti Tayta and their love affair. The sun fertilises the earth every day enabling life on the planet, where the Andeans have learned to respect everything as being part of one big family.

As the son of Mother Earth and Father Sun, the human being has three fundamental powers: “Munay” the power of the heart, pure love, “Llankay” work, service, and

“Llachay” wisdom and awareness. Man’s task is to share and let these three great powers flow into his life to make the Inka seed sprout in him, the seed of divinity that exists in all of us. It is said that if a man succeeds in this endeavor, then humanity will evolve and shine like Father Sun.

According to the Andean vision, the power of the Munay corresponds to the power of pure love. For the Andean, love can not be held or owned, it is rather an expression of openness, of a liberation toward our divine essence, towards the spirit. The Munay is also the first power that the paqo must develop, as the opening of his heart is the first step towards the knowledge of his inner strength.

The second power is the llankay, i.e. work or service. The children of the sun conceived work and service as an opportunity to help the Pachamama to create abundance and prosperity for the entire community. 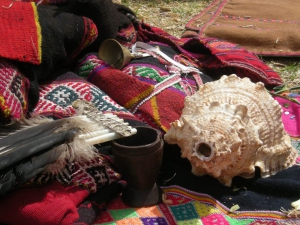 The llankay is the materialization of love, as service to others, to the community and to Mother Earth. It is the power of those who have developed the ability to lead, teach and guide a community and it is connected with “ayni” that is with the universal law of reciprocity towards any form of life and towards the Pachamama, which requires a great attention to harmony and energy balance between taking and giving.

The third power, the llachay, is wisdom and knowledge and comes from the understanding of what we really are, divine essence, fruit of pure love. He who reaches the status of

“Tuqui llachay” lives the experience of being one with all the living cosmos, one with divinity, which is practically like enlightment. The Andean Masters say that, when you reach this state of consciousness, a hummingbird, called the cosmic messenger, appears, flying over the enlightened and sucks the nectar from his head fountain.

Symbolically, this image means that each of us is a flower, which is able to open its petals and give the universe its fragrant nectar, that is its enlightened conscience.

According to the Andean vision, the three powers concern also the universe, as man is a part of it. Although the concept of heaven, purgatory and hell does not exist in the Andean tradition, still there is a division into three worlds.

The lower one, called “Uku Pacha” or the dark world of dense and heavy energy, has the snake as its symbol.

The snake, as the Indians say, has the secret of evolution: it is a master of time and transformation in its continuous change of the skin that does not get old. It teaches man about the art to get rid of the heavy energy accumulated through his experiences, called “hucha”. According to this view, man can pursue its path of evolution, if he is able to let go of every wound, every pain that is generated through non-harmonic or non-reciprocal relationships, i.e. where the law of Ayni is not respected. 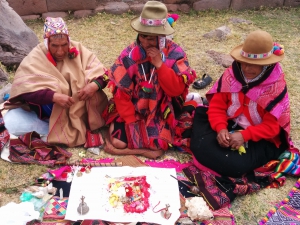 The second world, the middle world, is the “Kay Pacha”, the world we live in, the world of relations, symbolized by the puma. The puma is a master warrior due to its ability to remain focused and aware when facing life, death and changes courageously.   The puma, as the Andean people say, can wait patiently for its prey, it moves with agility and attention, acts secretly, without being seen. It teaches us to free ourselves of our ego and our personal value, to act with intention, impeccability and delivery.

The third world, the highest, is called “Hanaq Pacha” or upper world, is the realm of the spirit or the world of the condor. This animal, with a wingspan of up to three meters, is one of the main symbols of Andean culture. The condor guides us in the ability to elevate ourselves and see the perfection of life, of every single moment, of everything present in order to experience the infinite, the timeless and eternal light.

The Andean paqo is aware that everything in the universe is alive and interdependent, as united by a network of infinite and invisible energy threads. He knows the three powers and the three worlds and the divine seed that is in him. He must know how to listen to the wisdom of his physical body and be able to get rid of heavy energy, by loving and respecting Mother Earth and all living things. He is a warrior of light, a fragment of the infinite mystery, who fights the blossomed battle against the shadow that exists in his heart.