Home/THE INACCESSIBLE SEMPLICITY OF WHAT IT IS

THE INACCESSIBLE SEMPLICITY OF WHAT IT IS

Does a path that leads to the Being exist? If it does, it is a circular way. The idea of life considered as a straight line entails the principle of an End and of the Eternity fall.

The man of XXI century is not asked to “be” , but “to become”: burning down in semblance with no trace of himself neither of seeds for new germination.

Agitation and sterility nourish the contemporary myth , raising the flag of a misleading freedom of the individuals. What we perceive as real, fragmented and deceptive, creates disorientation even though the way is well traced. The revolution would be the completion of a full cycle up to restart again, as the Nature does, showing a perpetual and a cyclical movement to return to itself.

So,  Wandering and seeking are solid bases to aim the Being,  but only with the acceptance of  the life flow.

Therefore, the artistic research is seeking in order to come back to the Essence. I’m not interested in critical or moral matters, but simply in communicating that sense of gratitude for the man’s skill to exist beyond the artificial examples. Isn’t the most important  artist’s capacity the one that permits the Man masks to be put off and to be led to the Essence, by using infinite kinds of imagination?

Nowadays, it is not only necessary a new form of Art that must walk away from a spiritually empty aesthetic opulence, but  also a new strong overlook, able to resist the most attractive proposals of the imagine business.

We came across the epiphany of an  unexpected awareness, so the artist has a fundamental role in building a new world.

For the last few years, I’ve been working on a project, called “ The inaccessible simplicity of what it is” (2) which was elaborated since 2010. It is composed by two parts, Apeiron and Kyklos, linked to each other by the same way of production ( script, staging and shooting). The project, which is still in progress and has an artistic itinerant development, is also composed by a performance, which was presented in 2010 and a video production that soon will be published. 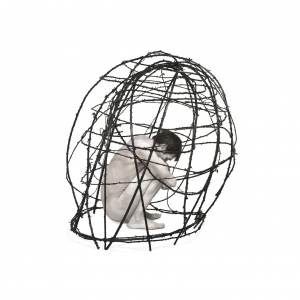 Night of the Mind

The creative process, in which the shooting is considered as final synthesis, is based on ritual gestures: a white pigment on the body or a black one on the vegetal elements that would compose the scene.  The body painted white doesn’t  just represent an act of purification, leading to an ancestral condition, but it can be thought also as a deep spiritual renewal. The black coloured plants , on the other hand, are metaphor of the man’s incapacity  of feeling himself as part of Nature’s order. This symbolic contrast between the absolutes, black and white, gradually blends to the total white as the last pictures of Apeiron show. The human and the vegetal bodies join together, showing that everything is unity and equilibrium of strengths and every attempt of distance is a mental category, a misleading classification.

Kyklos, instead, is the miracle of  regeneration, portrayed with “the natural body” of an uproot tree, drag to the valley by the running of the river, given back from earth to the sea. From this “natural body”, with no vitality in appearance, the human  moves, looking for light, seeking for a new life, for passing the physical limit of being, of time, space and of matter, to close the cycle up of the eternal becoming. It is almost a celestial body, thrown into the void, seeking for a fusion with the Absolute.

Both parts present a deep research of harmony and of unity:  the white space, empty in power, is the land of the lost correspondence between Life and Essence. 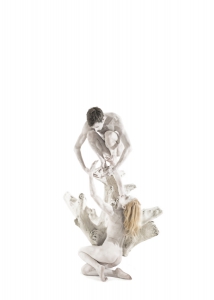 The inaccessibility of what it is